Few things warm the heart as much as the rumbling purr of a happy cat. There’s more to your cat’s purr than meets the eyes, though. Unlike a cat’s trill or meow, purring is a complex phenomenon. It happens for a variety of reasons, has wild origins, and may even offer healing properties—to cats and humans alike.

How Do Cats Purr?

So what, exactly, is a purr? And how does a cat make that magical sound? Unlike other vocalizations that cats or humans make, purring happens when cats inhale and when they exhale. According to Scientific American, purring begins in a cat’s brain when a neural oscillator sends intermittent signals to the vocal cords, or laryngeal muscles. This causes the muscles to vibrate between 25 and 150 Hertz, separating the vocal cords into the unique vibrato that we know as the purr.

Why Do Cats Purr?

Ask anyone with a cat, and they’ll tell you that the purring is a sign of a happy cat. And while this is often true, cats purr for a variety of other reasons. Not only do they purr when they are happy, but they also purr when they are sick or injured, as a form of communication, or even to get humans to do what they want.

It seems counter-intuitive that cats purr not only when they are happy, but also when they are in pain. And yet, they do. Cats purr when giving birth, when they are sick or injured, and even when they are dying. But why? As it turns out, purring may be a physical mechanism to help with healing. Vibration therapy at frequencies between 20 and 140 Hertz has been shown to help bones and tendons heal faster, assist in the healing of wounds, and relieve pain and swelling. A cat’s purr, at 50 to 150 Hertz, falls well within this range.

Your Cat’s Purring: A Secret Superpower

Not only do cats purr to help themselves heal, they also purr to help others heal. This healing help extends beyond species boundaries, too. Dr. Jim Sanderson of the Small Wild Cat Conservation Foundation remembers a time when his colleague broke his collarbone. His colleague’s cat never set foot upstairs until that fateful day that he came home, injured. Until he was recovered, his cat cast aside any misgivings about going upstairs and settled in on his chest, purring ‘like a freight train’ until the bone was finally healed.

Of course, cats purr as a form of communication, as well. Kittens first begin to purr at only a few days old. This helps their mothers to locate and feed them. Into adulthood, cats often purr to signal contentment, but will also purr to communicate nervousness, fear, or stress. PetMD compares the purr to the human smile. Usually, it happens when a cat is happy. But, like a nervous smile, it may also act as an appeasing gesture.

A study published in Current Biology proposed that cats also have a unique purring frequency designed solely to motivate humans to attend to their needs. This urgent-sounding, high-frequency purr occurs at nearly the same frequency as a baby’s cry. Responding to the cry of a human infant is an evolutionary behavior written into our very genes. This high-pitched purr plays to that innate urge within each of us and prompts a faster response to the cat’s needs and wants. 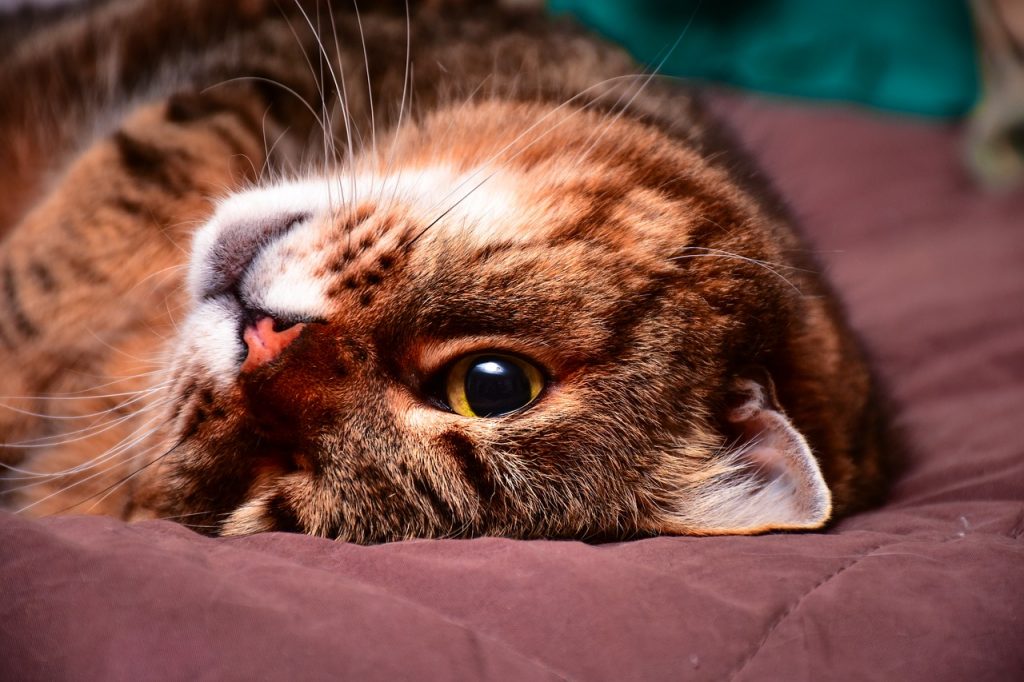 Domestic cats aren’t the only cats who purr. Certain big cats also purr, including mountain lions and bobcats. Others, like lions, tigers, jaguars, and most leopards, have a modified larynx better suited to roaring. These big cats have a large pad of tissue near the front portion of their vocal folds. This helps them to roar, but it may have left them unable to purr. Anatomist G. E. Weissengruber hypothesized that the pad of extra tissue dampens the vocal fold vibrations needed for a purr, making it difficult or impossible.

There are other animals that can purr, too. Civets, genets, mongooses, hyenas, guinea pigs, and raccoons can all purr. What about humans, though? Can we purr?

References to humans purring can be found scattered throughout literature, especially modern literature. Dialogue is often purred in satisfaction or contentment. Sometimes it’s purred as a suggestion. These references may be more metaphor than anything, though. A self-satisfied protagonist may remind the reader of a smug cat. A suggestive one might remind us of a cat, purring and rubbing close to ask for something.

Although humans can’t purr in the same way that cats do, we can imitate the sound. By pressing your tongue against or near the roof of your mouth, you can mimic a cat’s purr. The same mechanism is often used for rolling ‘r’s in some languages. Because these sounds are created with your mouth and not with your vocal cords, it cannot be considered true purring, but your cat might appreciate the effort nonetheless.

The next time your cat rumbles a content purr while curling up for a nap, take a moment to appreciate just how incredible such a simple sound can be. With healing properties, an evolutionary origin, and unique vocal cords capable of producing that sound, a cat’s purr is, perhaps, more impressive than we ever realized.